We would like to introduce you to a recent ʻUluʻulu acquisition: The ʻIolani Palace Collection from the Friends of ʻIolani Palace. 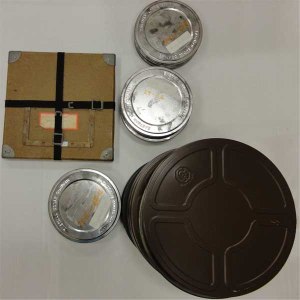 Label on film reel from the ʻIolani Palace Collection

King Kālakauaʻs vision for Hawaiʻi can be seen through the architecture and building of ʻIolani Palace. Built as a statement to the world and infused with Hawaiian symbols to establish his trust with the people, the palace is a hybrid of Hawaiian and western worldviews. The palace had fallen into disrepair after being used as government offices during the various governing eras of the Provisional Government, the Republic of Hawaiʻi and the Territory of Hawaiʻi. In the late 1960s after the government offices moved to the new Capitol Building, the restoration process on the palace began. This collection includes 156 tapes and motion picture film reels documenting the restoration process and events like the Centennial Jubilee and Regatta. These materials will soon be available to researchers and demonstrate the mission of ʻIolani Palace: “to preserve, restore, interpret, share, and celebrate the unique cultural, historical, and spiritual qualities of ʻIolani Palace and its grounds for the benefit of native Hawaiians, the people of Hawaiʻi and the world.”  As the palace stands as an important site for Hawaiians and others, we take this responsibility of the care and preservation of this collection with great honor.

For more about the history of the restoration of ʻIolani Palace, visit their website.

This entry was posted in Recent Acquisitions. Bookmark the permalink.