It`s that time of year again filmmakers and film enthusiasts are in town for the 33rd Annual Hawaii Film Festival (HIFF) and guess who stopped by the archive yesterday? Kanaka Maoli filmmaker Christen Hepuakoa Marquez whose film, E Haku Inoa: To Weave A Name, is playing at HIFF this year. Christen came by to look at footage for her next project and see what we are all about! Mahalo e Christen. Click on picture below to see a trailer and go to toweaveaname for more information. The film will be playing at HIFF on  October 17th at 5:45 and 19th at 7:15 go see it! 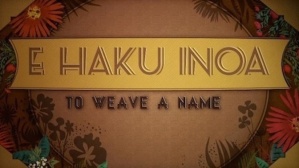