‘Ulu‘ulu is pleased to announce our latest acquisition, the Meleanna Aluli Meyer Collection. The collection includes original 16mm motion picture film reels and sound recordings created during the production of the documentary film Puamana in 1989-1991. Produced by Meyer, Puamana features interviews, songs and performances by Irmgard Farden Aluli, one of Hawai‘i’s most loved and influential musical composers. 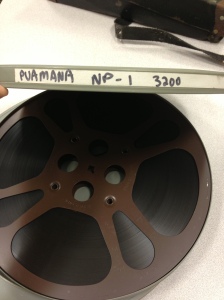 This acquisition is a timely one, as it comes very soon after the passing of noted documentary filmmaker Les Blank, who directed and shot the film, his only production in Hawai‘i. Meyer recalled an early meeting with Blank at his home in Berkeley, in which she saw several arrangements of flowers in all corners of the house. She instantly knew that anyone who could appreciate and fill their home with so much natural beauty was the person to capture the story of Puamana and Auntie Irmgard that Meyer envisioned.

The approximately 40 hours of raw footage, audio and outtakes are a unique resource that will be available to researchers for the first time, and ‘Ulu‘ulu is honored to be their caretaker. 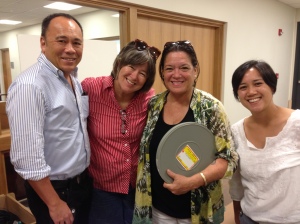 This entry was posted in Recent Acquisitions. Bookmark the permalink.