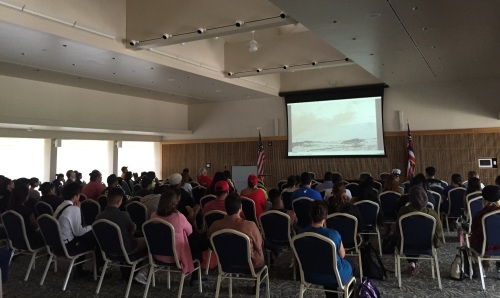 As you have undoubtedly noticed, Mauna Kea has been heavily covered in the media lately as the site of the proposed Thirty-Meter Telescope (TMT). In an effort to educate the UH West Oʻahu campus and community, we co-hosted two film screenings and invited speakers from both sides of the issue to engage in dialogue after each showing. The showings were held a few weeks ago now but since Mauna Kea remains in the news and a topic of discussion we thought we’d share a recap of the events held here at UHWO.

The first showing was of “First Light,” a documentary film produced by PBS Hawaii. Following the showing, Dr. Gunther Hasinger (Director of the UH Institute of Astronomy) and Dr. Paul Coleman (a Specialist at the Institute) participated in a panel discussion moderated by UHWO Professor Dr. Dan Boylan. About 40 people attended the showing and panel. After presenting general information about the proposed TMT and the thirteen working telescopes already on the mountain, the presenters invited those in attendance to ask questions of their own. Some wanted clarification as to why Mauna Kea was selected and questioned how the Institute and TMT planned to move forward considering the growing movement in Hawai’i and across the globe to protect the mountain. The discussion led us to ponder whether or not a compromise exists. 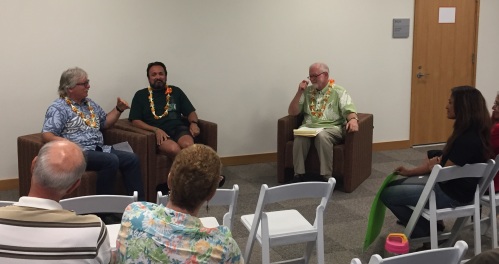 The second showing was of “Mauna Kea: Temple Under Siege.” Produced and directed by Nā Maka o ka ʻĀina (click here to see archival footage from Nā Maka o ka ʻĀina), the film “paints a portrait of a mountain that has become a symbol of the Hawaiian struggle for physical, cultural and political survival.” After the showing, Dr. Noelani Goodyear-Kaʻōpua (UHM Political Science), ʻIlima Long (MANA), and Bianca Isaki (KAHEA: The Hawaiian Environmental Alliance) each shared presentations as part of an Aloha ʻĀina panel moderated by Tiana Hendersen (UHWO Piko Project). From the film and these presentations, the 130+ students and community members in attendance learned about the cultural, political and legal arguments being raised to protect Mauna Kea. 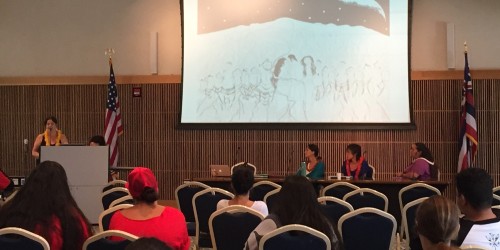 Ilima Long presenting as part of Aloha Aina panel after the showing of Mauna Kea: Temple Under Seige

It is our hope that all attendees left with a better understanding of the history of Mauna Kea and the ongoing controversy surrounding the TMT. This was the first event of what we hope will become a Mālama ʻĀina Series focused on environmental and cultural issues in Hawaiʻi and the Pacific.

We here at ʻUluʻulu would like to mahalo all who attended and also send a special mahalo to our guest speakers and event co-sponsors – the UHWO Library, Political Science Program, Hawaiian-Pacific Studies Program, PIKO Project and Kealaikahiki.