Our Cataloger goes to Guam for the 20th Annual SEAPAVAA conference

Koa Luke, Assistant Archivist and Cataloger, delivered a talk at the 2016 SEAPAVAA annual conference held in Guam June 6-11, 2016. This was the first time that ‘Ulu‘ulu has been represented at this prestigious international audiovisual archiving conference.

Hafa Adai and aloha from the 20th Southeast Asia-Pacific Audiovisual Archive Association (SEAPAVAA) conference held in Guam, where the land is beautiful and the people are generous and hospitable hosts.  SEAPAVAA is an association of organizations and individuals involved in the development of audiovisual archiving in Southeast Asia and the Pacific to preserve and provide access to the region’s rich audiovisual heritage

The conference began with a two-day training workshop called “Caring for Collections”, led by Professor Ray Jiing and his team from the Taiwan Newsreel and Documentary Film Archive at Taiwan National University of the Arts.  In the workshops, participants learned through hands-on experience how to dissect, clean, repair and digitize VHS videotape all on a budget.  The highlight of the two days was getting to clean and digitize a moldy tape of one of the participants’ brother’s wedding using a custom-made hand-cranking cleaning device shown in the right corner of the picture. (Photo by Bono Olgado) 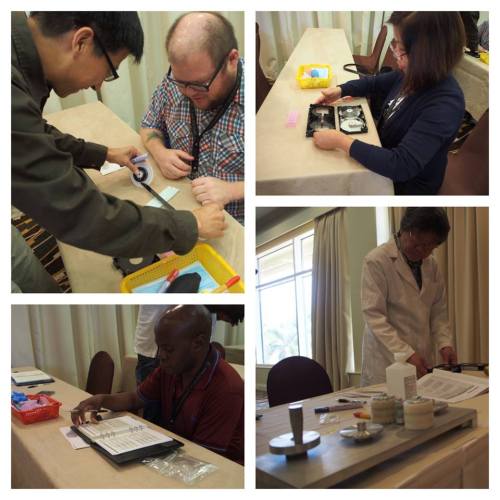 After two great days of workshops, the conference began with a keynote speaker from the Micronesian Area Research Center (MARC) focusing on conducting oral histories.  I, along with Mick Newnham, was on the first panel entitled “Community-Based and Culturally Sensitive Metadata Management.”  I presented on Hawaiian Language Subject Headings and Crowd Sourcing.  My talk was received well and started a dialog that would continue throughout the conference, building networks and starting new collaborations.  This panel fit well into this year’s conference theme of Intellectual Property, Rights, and Audiovisual Archives: Reframing Boundaries and Possibilities, which aimed “to reframe the boundaries and possibilities of audiovisual archives from legal, ethical, practical, and theoretical perspectives in national, regional, and international contexts.”  The theme and conference covered such topics as: law and ethics, Indigenous Cultural and Intellectual Property (ICIP), traditional knowledge, repatriation, copyright, and privacy and access.  There was also an Archival Gems night where attending archivists brought moving images or treasures with them to screen Wednesday night of the conference.  We were very pleased to screen Singer presents… Hawaii-Ho! (Photo by Loren Bustos at conference farewell dinner)

The conference ended with a cultural excursion to the Valley of the Latte Adventure Park located in the south side village of Talofofo.  At the park we took a cruise down a river where the captain pointed out nature, wildlife, and cultural sites.  At our stop we were greeted with a barbecue lunch and a female pig named Jeffery.  After we ate, we took a hike to an area with traditional houses and latte stones.  Latte stones are culturally significant to the Chamorro (people indigenous to Guam). They are pillars capped with a spherical stone used as building supports in traditional houses.  Latte are remarkable because they are two pieces put together, not with cement or plaster as historically there were no such material available, but with slots on the bottom of the top piece and the top of the pillar.  It was a great way to end a remarkable conference and trip. (Notice the Latte stones behind the group in this photo. Photo by Loren Bustos)

See you next year in Manila for SEAPAVAA 2017!! 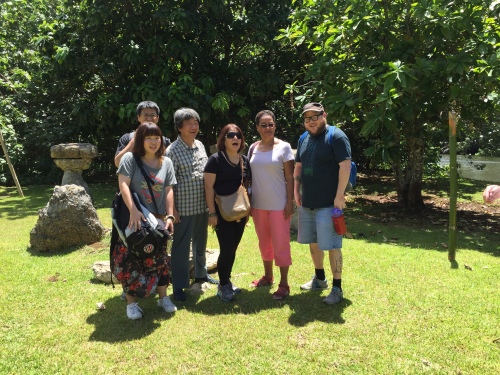