This past week the quality of Hawaiʻi’s food has been a topic of national news. Saying that Hawaiʻi has subpar food is overlooking the many ʻono delicacies that make Hawaiʻi unique to the world. Hawaiʻi has been in front of the eat local food movement and as we move forward in the 21st century the local food industry is an example of how our economy can be strengthened. Here are some clips in our collection related to Hawaiian food. 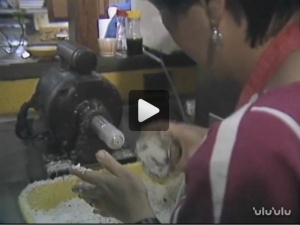 Haili’s Hawaiian Foods has been a local favorite for decades and is one of the few Hawaiian-owned Hawaiian food restaurants. Here the workers explain how that ʻono food is prepared.

In the later part of the 19th century, workers were brought over from Portugal as one of the many nationalities to work on the sugar plantations. Along with bringing instruments that would evolve into the ʻukulele, the Portuguese brought with them their delicious sweet bread.  Here is a clip from the Lyman Museum and Pilot Project of how it’s prepared. 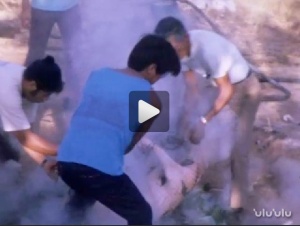 For Hawaiians, food is an important aspect of social life. In traditional times the land, sea, plant and animals were kinolau (forms) of gods and ancestors, therefore producing and eating certain foods was a way of communing with them. In this clip, local Lānaʻi residents prepare a pig in an imu.  An imu is a traditional oven where a hole is dug and heated rocks are placed inside. After the rocks are heated, plants or animals are placed on the rocks and covered with leaves, and left to cook for hours. Here the people place a pig inside which will result in Kalua pig which is similar to pulled pork in texture, but not in taste.    —By Koa Luke