Last Friday, Oceania Rising took place at Kamakakūokalani: Center for Hawaiian Studies to remember and observe the 59th anniversary of the bombing of Bikini Atoll and reconnect Pacific peoples for peace. On March 1, 1954 the U.S. military dropped a nuclear bomb larger than the bombs dropped on Nagasaki and Hiroshima. The fallout affected the surrounding islands and peoples. Two decades later Hawaiians and supporters fought for and were successful in stopping the bombing of Kahoʻolawe, a sacred island used historically for navigation. Around this time people from around the Pacific were linking up with each other and making connections with what was going on in their islands. One group which formed out of this linking was Nuclear Free Pacific (NFP), which later added an I for Independent (NFIP). NFIP was a convergence of Pacific Peoples and their supporters to stop the  bombing of the Pacific and work towards peace. Oceania Rising was a day of remembrance, reflection, and reconnection! Below are clips related to peace movements in Hawaiʻi and around the Pacific.

The 1980 Nuclear-Free Pacific conference took place in Hawaiʻi.  As noted above this was a convergence of people from Hawaiʻi, Tahiti, Japan, and all over the Pacific to discuss and organize towards disarmament. The documentary includes speeches and interviews with members of NFP as well as footage of the No Nukes Concert which took place at Andrews Amphitheatre on the UH Mānoa Campus. Featured in the clip is Graham Nash of Crosby, Stills, & Nash and Olomana and Kawaikapuokalani Frank Hewett. 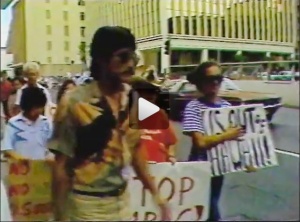 Produced by Nā Maka o ka ʻĀina in 1982, this program is a compilation of footage dealing with the Protect Kahoʻolawe ʻOhana’s 1982 campaign to stop RIMPAC — Rim of the Pacific military exercises, part of which included the bombing of Kahoʻolawe island. Speeches and musical presentations from the March 6, 1982 Tribute to George Helm and Kimo Mitchell at ʻIolani Palace are intercut with footage of ʻOhana activities, news coverage of demonstrations and photos/narration from the PKO’s educational slideshow, narrated by Luana Busby. This video was digitally remastered/archived in 2011 by Joan Lander and Puhipau of Nā Maka o ka ʻĀina with support from Hawaiʻi People’s Fund.

One response to “Oceania Rising”