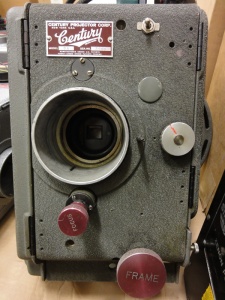 Variety Magazine recently published an article in April 2013 called “The Reel Ending” in which authors Andrew Stewart and David S. Cohen describe the near extinction of celluloid “as digital delivery of movies rapidly becomes the new norm at theaters in the U.S.” citing reasons such as cost savings in distribution and new creative possibilities that only digital projection can offer.

Hawaii is also following this norm and three of the last analog projectors on Oahu have now found a new home at ‘Ulu‘ulu.

Thanks to the efforts of General Manager Burton White and Production Manager Jude Lampitelli, the Hawaii Theatre worked with ‘Ulu‘ulu to save these analog projectors from the dumpster and to ensure that they will be preserved at our archive in the UH West Oahu Library as display pieces and hopefully one day be refurbished and operational.

Getting the projectors to ‘Ulu‘ulu was a challenging endeavor and definitely required a team effort. Each projector weighs about 500 pounds and is housed in a six-foot tall rack. Alan Sakaida of Consolidated Theatres disassembled the projectors and audio equipment in order to break them down into smaller components that could more easily be moved out of the Theatre. The Hawaii Theatre itself is an historic building with no elevators and much care and planning had to be taken to make sure that chairs, carpets, stairwells and walls were not damaged by the move. This meant that the movers (mahalo Island Movers!) had to hand-carry each item out of the projection booth, navigate the upper balcony steps, go out the side door, and down concrete stairs to the van below.

We are very excited that these projectors have come to ‘Ulu‘ulu and look forward to getting them reassembled and on display!

Pictures of the projectors and of the move day can be seen here.